Guidelines on Modeling (applies to everyone)

Guidelines on Modeling (applies to everyone) #95164

Feedback
I see these things come from people all the time, and I CANNOT stress this enough: please don't say "it's ready for approval" or anything of the sort. It is hands down one of the most annoying things I ever see in this section. You can praise a model (with some criticism added unless it's just a gem and literally needs no work which is rare) but please don't say it's ready for approval. Another thing would be that if you think something is wrong, but you have no idea what, please don't waste the user's time by saying "Something looks wrong, but I don't know what though".

Spam/necroing
Normally I would put this under feedback, but this has been happening a lot more recently so I figured it should have its own section in this mega post. Please don't necro posts; what this means that if the last person to post said something around a month ago, please don't say anything. It's pointless; chances are the original poster hasn't been on in a while, they gave up on the model, or it's in approval, so please don't mindlessly bump. Another thing is that it is rather annoying for one user to jump from post to post on a lot of topics in each section just to bump their post count. Please don't do this; it's mindless on your part and a waste of time cleaning it up on mine.

Requesting
Another annoying thing is requesting models. Me saying this won't stop most people (because the ones that are reading this most likely already know) but don't request models; this includes making a new topic and saying "I want the gen 6 starters, Lugia, Registeel, Dunsparce, etc.). It also includes saying "Nice job! You should also make such 'n' such". You can ask if they will make the next Pokémon in that line; for example, a person made Weedle, so you can ask "Will you make Kakuna/Beedrill?" but that's about it because no one likes someone demanding things.

That's about it for everyone. Time for some guidelines for modelers.

Policy on Generation 6 Pokémon
We will not accept any generation 6 Pokémon at this time; this is out of respect to not do the current generation Gamefreak is using right now, so more than likely you won't see anything until generation 7 (things may change along the road if we complete generations 1-5 and have all 649 Pokémon but don't cross your fingers).

Plagiarism
We are WELL AWARE that there are some websites out there that have taken the models from the actual games and put them up for download as objs. (I'm not going to link for hopefully obvious reasons.) You can use these models for REFERENCES ONLY. Trust me, we aren't stupid; no matter how much you try to cover it up, we (or at least I) will find out if you took the model from one of the sites and called it your own. So to save everyone a bunch of trouble, please don't steal and just use the model as a guideline or something when modeling.

Polygon Count
I get this question a lot, and it's understandable why too. Fact of the matter is that there really isn't one. What we look for is something that looks low, so if your sphere is like 20x20 that's WAY too high, but if it's 10x10 or something of the sort then its fine. Maybe a bit lower; it varies program to program.

How to pose your model
So you may be familiarized with how modeling works: they position the model in something we call a "t-pose". Don't actually do this (at least not yet, we are working on methods of properly rigging models) but for now, just make it like how you would see it in the game. Reason for this is that we have to separate the limbs on the models and then put them together in code and rotate everything individually to animate it, so yes, it's a bit weird to say the least

Flying Pokémon
This normally only pertains to birds, but sometimes you have other Pokémon that can fly like Golurk. When making a Pokémon that can fly, you have to make 2 positions. One needs to be on the ground, or "Standing position", and the other where it's flying or "Flying position". If you don't understand what I mean, look at these examples stol..... i mean provided by Karry and Zero_Breaker:
Spoiler:
Bird Pokémon
Standing How to UV map your models (Provided by Edeodin)
Spoiler:
https://www.dropbox.com/s/zpzab90frydydpa/UV%20Mapping%20for%20Pixelmon.pdf

How to Texture Properly (Provided by Karrybird)
When texturing, especially if you're a beginner, it is advised that you simply use the eye dropper tool to get the colors from the official artwork of the Pokémon. You can try to make the colors yourself in the program you're using, but unless you know what you're doing, the colors will most likely not look good together. Using pure black is also a big no-no. It almost never looks good on anything no matter how dark the Pokémon is, so just use a darker grey if anything.

(optional) Model Separation
You don't have to do this, but it does save us time. Please note that you should ONLY do this after it's approved so you don't waste your own time, and when uploading to Dropbox, make sure you also upload the model without it being separated.
Spoiler: 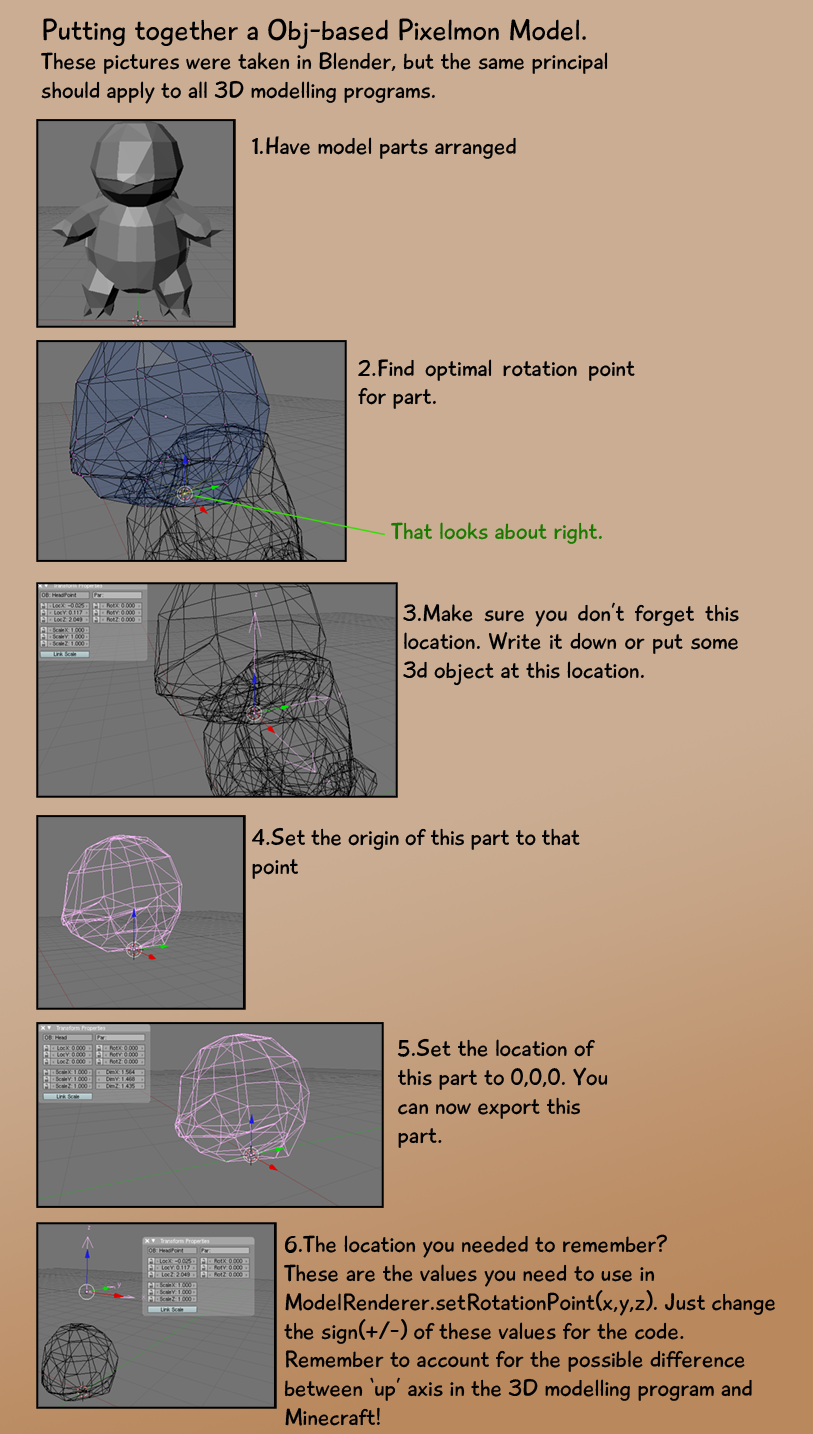 Approval
When posting in approval, there are 3 things that can happen:
1. Approved - speaks for itself, your model gets in game. Assuming you don't have access to Dropbox already, I'll send you a PM asking for your email and explain to you what you need to do from there.
2. Denied - This is when I (or Mr. M) denies a model and you get an explanation on what needs to be fixed. Normally when doing so you just post the update on your approval thread, but sometimes we make it go back to feedback.
3. Jumping the Gun - What I mean by this is either getting next to no feedback in the feedback section so you assume it's fine, or you post it in approval without putting it in the feedback section first. No one is above this rule; everything must go through feedback first, no ifs ands or buts

Model Recommendations
Not sure what to make? Well this part of my super post is for you. We have made a list of Pokémon we feel as though need to be made faster than others and would like them to be made, so if you see anything on the list you would be interested in making, by all means take a shot at it. We would love for you to make some (please note we need the reds more then others but it's preferred to have the entire line made as an obj).
https://docs.google.com/spreadsheet/ccc ... _web#gid=0
http://www.youtube.com/user/PyroBlock
https://twitter.com/PyroBlock
http://www.patreon.com/user?u=294176