Firstly, how can we implement it in a way that is both functional and enjoyable for players; secondly, how could we make changes that benefit both survival and adventure maps.
What if villages had a chance to spawn a "Day-Care" in addition to PokeMarts and PokeCenters? That would make effective use of the "Day-Care" NPC and make the villages seem more alive and entice players to go to them as a resource instead of just pillaging and looting them.

At the very least, breeding as it is now doesn't work for adventure maps at all because it requires each player to have their own ranch block. I think if we did go the NPC route to allow any player to use a day-care at a village, ranch blocks should still be available for a player's base because part of the benefit to those is being able to see and interact with the Pokemon while they're in the block. 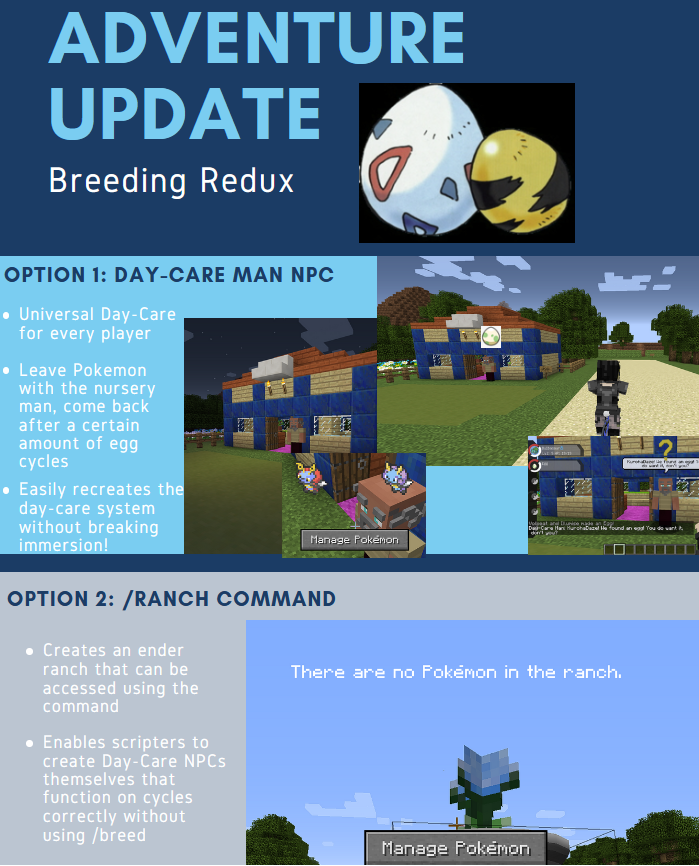 Everyone call me Elf Monster

I feel that the ranch blocks will allow the competitive players to continue fine-tuning the breeding experience whereas the daycare would allow the more casual players who just simply want that dang pichu to get it without researching breeding environments.

I would add that daycares should have the option for level up as well, same as the main games.

By PokeWillpower - 16 Sep 2020 13:16
- 16 Sep 2020 13:16 #206136 Absolutely. I personally find Ranch Blocks to be a fine addition as the configs already allow for some customization with how in-depth it is.
However, one problem that can't be ignored is that servers that don't allow players to build have to forego breeding because of this. A "Day-Care NPC" that opens a sort of day-care GUI depending on the player would be a seemingly easy fix to this and it could also be added to villages so that breeding can be done more easily on survival worlds!
Regardless, Ranch Blocks just don't work at all for big servers. I saw the idea and I was like "Huh, why don't we have this?" I'd hope it gets some traction.
Everyone call me Elf Monster